Pokemon GO is a friendly game for gamers of any skill level. But that doesn’t mean it’s missing nuances and tricks that trainers can take advantage of to get the most out of the game. Today, we’ll be covering some of the finer details of Pokemon GO, including how to maximize XP gains, the best way to utilize your candy, how to take over all the Gyms, and more!

If you’re newer to Pokemon GO or just need a refresher, be sure to check out our Pokemon GO tips and our more in-depth guide for beginners. 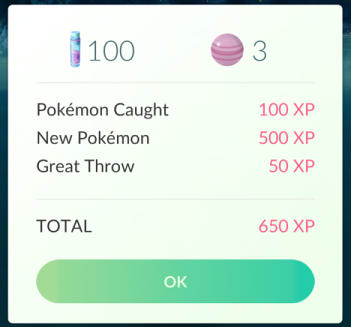 A breakdown of XP in ‘Pokemon GO’

Experience is an important part of Pokemon GO, as each level rewards you with items that you can use to aid you in your adventures. These items can usually only be found at PokeStops or purchased from the in-game store. Leveling also comes with other benefits, such as a higher CP cap for your Pokemon and stronger Poke Balls that make capturing stronger Pokemon much easier.

As a reminder, you can get XP from the following activities:

In addition to the above, you can earn special XP bonuses after catching a Pokemon by using certain types of throws:

You can get the Curve Ball bonus by pressing down on the Poke Ball and then spinning it before you throw it. The other bonuses are gained by landing the Poke Ball within the colored circle around the Pokemon — the smaller the circle, the higher the XP gain. Keep in mind, it appears (at least for now) that you cannot combine the Curve Ball bonus with the other bonuses.

As for Gyms, the XP you gain depends on the difference in CP between you and your opponent — the lower your CP is compared to your enemy’s, the more XP you will gain. Additionally, you will gain additional XP if you beat more Pokemon and survive longer.

How to maximize XP gains in ‘Pokemon GO’

Okay, so with the above in mind, the easiest way to get XP is to evolve Pokemon. But you don’t want to evolve Pokemon whenever you have the chance, and the reason is because of a little item called the Lucky Egg. Lucky Eggs are items that cause you to gain double XP for a half hour. And while you can certainly buy Lucky Eggs if you’re willing to put down some cash, you get a freebie at level 9.

The basic idea here is that you want to hoard as many entry-level Pokemon as possible and then use a Lucky Egg before evolving them all at once. Aim for Pokemon that only take 12 Candy to evolve — e.g., if you have to choose, capture a Pidgey over a Rattata — and remember that you get a Candy in the process (effectively making leveling cost 11 Candy). In doing this, you will be getting 1,000 XP for each Pokemon you level. Depending on how many Pokemon you’ve saved up, you can skip multiple levels using this process!

If you really want to go hardcore with the XP gains, wait until you’re near PokeStops to begin the evolving process. If you still have the double XP buff left over, pop a lure and/or an Incense and stick around catching Pokemon and activating the PokeStop until your buff runs out. If you’re also near a Gym that you feel confident you can take, the XP from this will also be a boon to your leveling.

There are, however, other methods of becoming the best outside of purely focusing on XP gains.

How to get a Pokemon with the highest CP

As I mentioned earlier, your level directly correlates with the maximum CP a Pokemon can have. In addition, you can tell if a Pokemon has a high starting CP relative to your level by seeing how far along the semicircle above its head the indicator is. For example, below you can see that the Caterpie on the left is only at about 50% of its potential max CP while the one on the right is much closer to 100%.

CP percentages also carry over through evolutions, so if you’re transferring Pokemon for extra candy, you’ll want to save the ones with the highest CP and use your evolutions on them. As a result, for any given Pokemon, it does not matter if you evolve first or power up first — the end result will be the same. Lastly, since trainer level dictates how high your Pokemon’s CP can be, you can use Candy and Stardust after each level to increase the CP levels of your best Pokemon.

A few other things to note:

If you plan to take on Gyms, it’s important that you have a diverse roster of Pokemon with high CPs. The reason for this is that Pokemon have weaknesses and the same kind of Pokemon can have different abilities that will come in handy in Gym battles.

The best way to win Gym battles in ‘Pokemon GO’

If you’ve ever played any of the Pokemon games for Nintendo systems, you’ll know that Pokemon come in different types and those types are strong or weak against other types, sort of like a more complicated version of Rock-Paper-Scissors. For example, a Water-type Pokemon is going to do more damage to a Fire-type but will take more damage from an Electric-type. These same rules apply to Pokemon GO.

This is important for more than one reason. The first and most obvious being that you’ll want to have counters to most (if not all) types in order to be able to actually take over a Gym. The second is more nuanced: Two of the same Pokemon can have different abilities, and those abilities won’t always be of the same type. For example, I have two Oddishes below but their power moves are not the same. The one on the left is a Grass-type ability and does less damage than the Poison-type ability on the right:

While this is really only intended for hardcore trainers, this will come in handy when picking your roster. If you are picking between boosting the CP of two Pokemon, be sure to take a look at both of their abilities — if one of them has an ability type you don’t already have on your roster, boost that Pokemon.