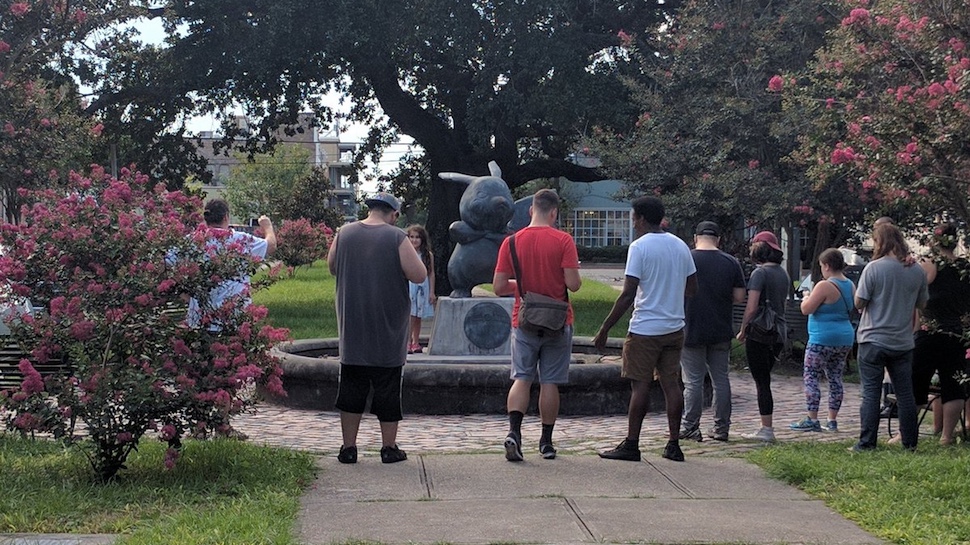 The power of Pokémon and Pokémon Go is great and can compel people to do some amazing things, as has been well documented thus far, but in terms of mysterious events, we may have just reached the peak: Overnight in New Orleans, a large statue of a defiant-looking Pikachu popped up, and nobody seems to know how it got there. Since Sunday, Coliseum Square Park has been the home to this “Pokémonument,” as it’s being called due to the inscription on the back, and fans are flocking to see the statue that looks like bronze, but is actually made out of fiberglass.

The site actually used to be home to a fountain, which is no longer in operation. “It’s a defunct fountain,” a member of the park’s neighborhood association said. “It’s actually on our list of fountains to get running again. So as long as it’s sitting here without any water flowing, it’s okay with me.”

There’s certainly no compelling reason to move the Pokémonument just yet, considering this is what the site looked like back in March, according to Google Street View and Reddit user SpenceMan01:

We’d say that a glorious depiction of the flagship Pokémon is an improvement over two tires in a dirty square pit. If you happen to be in New Orleans and want to pay homage to the mighty and powerful Pikachu, here’s the location of the statue. As a few Reddit commenters speculate, it’ll probably be a while before Niantic gets wind of this and rolls out an update that ruins the Pokémonument:

Heck, maybe a bunch more will pop up and we’ll have a Ruins of Alph situation on our hands. Pikachu himself seems to approve:

I hope nola leaves up #pokemonument 4ever. Ppl were leaving offerings & rubbing Pika belly. What a time to be alive. pic.twitter.com/ZwwUjZdkF1