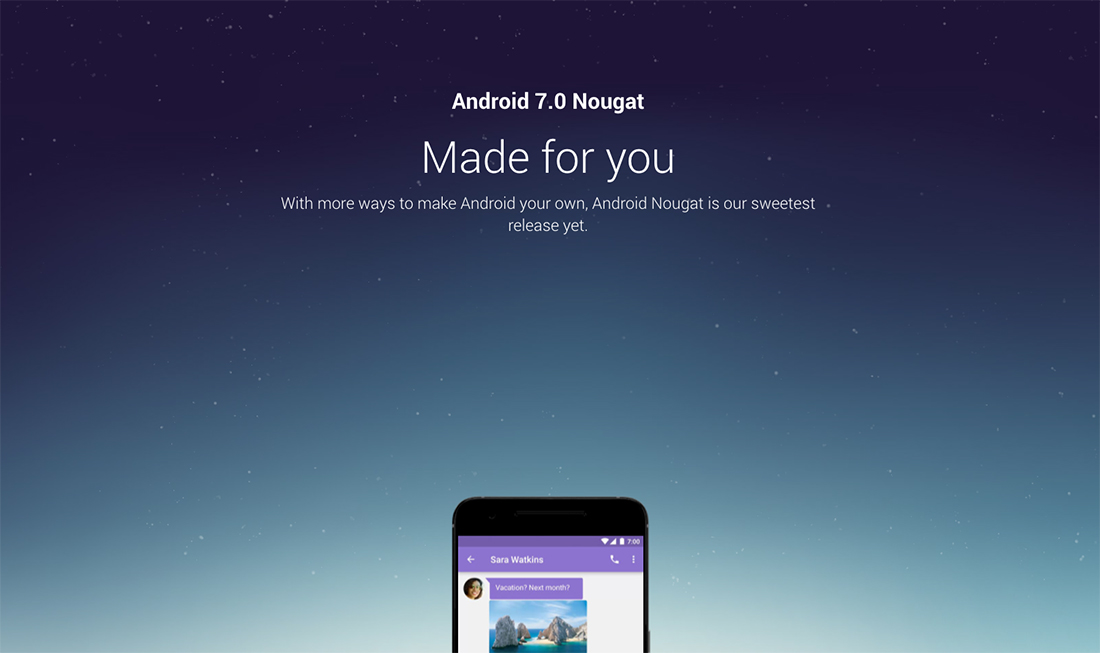 UPDATE : Here are the links to the OTA images. These are full images, not incremental files. Boot into recovery and use ADB sideload to push the update over from your computer. You won’t need an unlocked bootloader as you would for a factory image. It will not wipe your data, but you should back up just to be safe.

The links will be continuously updated.

Original : The Android 7.0 Nougat site just went live! Yes! That’s a thing that we care about, because we also think that Google may push out stable Nougat today to Nexus phones.

This is the day all of us android fans have been waiting for since March when Google unexpectedly dropped the developer preview upon us. There were reports that the delicious update may arrive on August 22.

Now Android 7.0 has finally landed in its final form, slightly ahead of schedule. That just leaves us with the question: when will it hit our devices? The answer to this will vary wildly depending on the OEM in question, with the current-gen Nexus devices getting it first.

Google says the Nexus 6P, Nexus 5X, Nexus 6, Nexus 9, Nexus Player, Pixel C and General Mobile 4G (Android One) will receive the over-the-air update over the next few weeks, while only a few Nexus owners will receive the OTA from today. Devices enrolled in the Android Beta Program are already receiving this final version. Of course, you’ll be able to manually update by flashing the system image starting today

Also note, at the bottom, that Google confirms that the LG V20 will be the first to run Android Nougat out of the box. In other words, the new HTC Nexus phones aren’t going to be here until after that phone arrives. Typically, Google releases new versions of Android alongside new Nexus hardware, but the company is breaking with tradition this year.

Google initially announced the first Android Nougat preview earlier this year in March, taking the opportunity at that time to release the initial developer preview of Nougat as ‘N’ to Nexus 6P, 5X, 6, Nexus 9, Nexus Player and Pixel C devices for download and consumption. Interestingly enough, that announcement and release caused some surprise by actually coming before the company’s annual I/O conference. However in classical Google fashion, the name Nougat was announced almost four months after the first preview release.

If you’ve been using the Android 7.0 open beta, you won’t notice a ton of differences here.