There are a number of ways to determine how well an operating system is doing, or not doing. One of them is to use usage monitoring businesses and their information. A number of independent Firms like Netmarketshare release stats every month publicly that are based on hundreds of millions of user interactions.

While this can be a little useful it comes with a grain of salt because such stats are not very accurate. It becomes more clear when you compare the stats by various other such firms each pointing to different numbers.

If Netmarketshare states that Windows 10 is at 21.13% in July 2016, W3Schools believes that it is at 25.4%, and Steam suggests that it is at 44.67%, there is no way of telling who is right and who is not. Admittedly, one could take an average of all these stats, or just use the data by the most trust-able source which can vary from person to person. 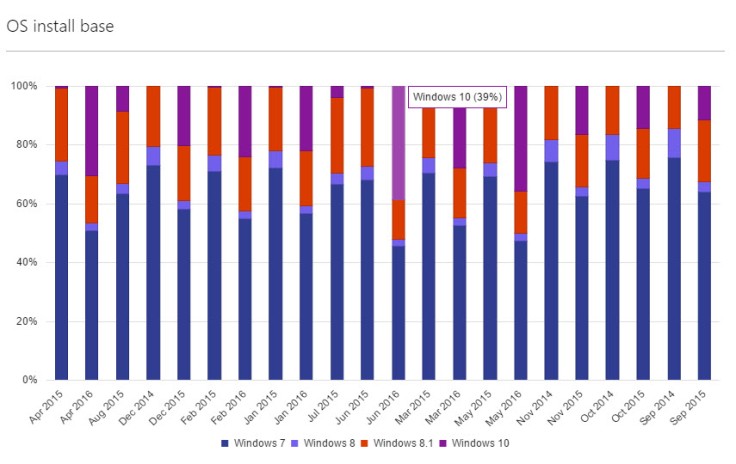 Microsoft publishes its own statistics, and they paint a very different picture than most usage tracking services.

Recommended : Reports of Microsoft teasing the Surface Book 2 are false

If you open the Windows Trends page on the Microsoft developer site, you will notice the following values for June 2016:

Microsoft’s data is based on telemetry data that Windows devices report to the company. Microsoft counts active installations only furthermore; this should end the argument that the company counts licenses or any re-installation of Windows 10, or downgrades of Windows 10 systems in its stats.

This is different to how firms like Netmarketshare get their data which is by checking connections to websites. Still, 39% is quite high and comes close to Steam’s value of 44%. It is interesting to note that Microsoft reports the same 44% if you switch to gamers only.

Compare that to Android Marshmallow’s 15% after a year if you’d like to feel a little better about 39%. Although, compared to how Microsoft imagined Windows 10’s success – I mean they literally gave it away for free to every existing user – wanting to hit a billion devices including tablets and smartphones, 39% must feel a little low.

There are certain points to be noted however.

First, Microsoft does not include XP or Vista, or other operating systems that are not Windows in its stats. If you would throw out those on third-party services, Windows 10’s usage share would be higher as well. This does not explain the full difference though.

It is furthermore unclear how many users opted out of sending telemetry data. Windows 10 ships without options to opt-out completely for instance (Enterprise editions can, the rest cannot), which may contribute as well.

And this leads us to another interesting statistic. There are many users who are considering ditching their Windows PCs, mostly because of reports suggesting that Microsoft is collecting a large amount of data from devices running Windows 10.

According to a study made by OnePoll, over 60% of the US public who regularly use Windows would consider switching to MacOS. I myself, though not an American would include myself among those 60% although I wouldn’t call it a switch per say, because I love PC games so using only MacOS is not an option for me. Anyways, the same study says that in the UK, around 67% Windows users are currently considering the switch to MacOS, and 15% of them say they will definitely ditch Windows 10 in favor MacOS.

Interestingly though, 39% users in the US say they wouldn’t move to MacOS regardless of the amount of data Microsoft pulls out. 39% is how many PCs have Windows 10. Co-incidence? I think yeah.  This number drops slightly to 33% in the UK.

The poll results come after the French National Data Protection Commission ordered Microsoft to fix multiple privacy failings in Windows 10. The commission pointed out three specific cases where it found that Windows 10 collects too much data from a computer. In addition Windows 10 also installs an advertising identifier by default which lets Microsoft track your browsing data (oh hell yeah I would use your edge browser Microsoft). It helps Microsoft sell you target specific advertisements which is such a craze among big companies these days.