Lenovo hasn’t gotten as much credit as it should be getting lately for innovating. The company’s new Moto Z and Moto Z Force are two of the sleekest new smartphones of the year so far, but they also feature what is almost certainly the most innovative new hardware feature we’ve seen on a smartphone this year. Dubbed Moto Mods, the phones support modular attachments that snap on and off to expand the phones’ capabilities in any number of different directions. Lenovo’s latest innovation comes in the form of its new Yoga Book which is nothing like anything you’ve ever seen before.

According to engadget, Tablets are on the brink of death, and it’s difficult to get excited about a new slate these days. And even though tablet-laptop hybrids are taking off, that market is cornered by Surfaces and iPad Pros.

Tablets were supposed to be the future. They were supposed to get us off the desk and away from the laptop, and usher us into a touch-enabled world of productivity and entertainment. A dream of computing where our devices seamlessly blend between activities and go wherever we need them to.

But somewhere between the iPads and Surfaces, tablets have become more like a luxury item you buy when you make up reasons why you need it in your mind and then they end up somewhere in your house never to be touched again. That’s what happened to me at least. Tablets never lived upto that dream of replacing a PC even though every year there’s a new challenger that promises to be a PC replacement. but fails, whether it’s because doing actual work on them is harder than it should be, or because they are barely different than the PCs we’ve used for years.

But now,  Lenovo is introducing a new take on the tablet computer. Lenovo’s new Yoga Book might inspire some good reactions. It’s about the size and shape of a hardcover children’s book, has two panels attached by a hinge, and can be used with your fingers or with its included pen. It even does some tricks with the pen that we’ve never seen before, like letting you write with real ink and have it all digitized. Lenovo didn’t set out to build just another tablet with the Yoga Book — it wanted to make something that was better for getting work done than what is already out there.

But in the process, it made a computer that’s both futuristic and relatable at the same time, just like the original Courier concept from Microsoft. And unlike the Courier, you will actually be able to buy the Yoga Book.

The company acknowledges that “productivity as it’s been defined historically is changing.” So says Jeff Meredith, vice president of Lenovo’s Android Chrome Computing Business Group, who set out with the goal to think about how tablets could be more productive in the way that phones are instead of the way PCs are. “We tried to flip that on its head a little bit,” he says, “We find many people doing more on their phones than on their PC. So the comfort level with a touch-based keyboard and a more mobile mindset should not be perceived as not appropriate for productivity.” If people are using phones more, Meredith argues, then tablets should act more like them. “I hesitate to even call [the Yoga Book] a tablet, because we really think it’s something else,” he says.

“I had this idea of a book; we ended up calling it the Yoga Book, but for the longest time we just called it ‘The Book.’ We really wanted to hit a form factor that folded, and when you were carrying it, it looked like a book. And not a big beefy novel, but a thin magazine-almost type of form factor,” he says. 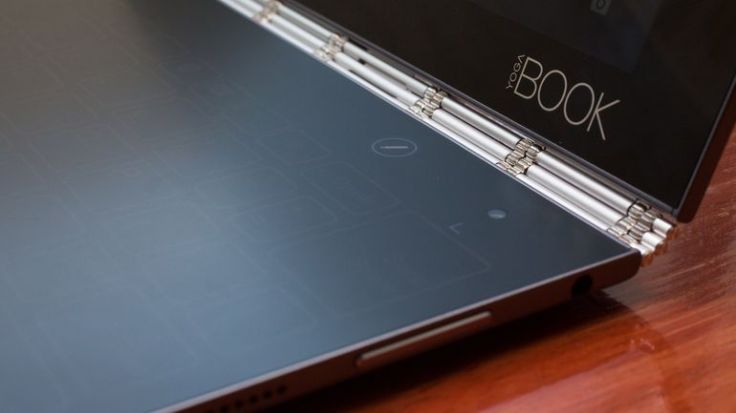 The Yoga Book has the same shiny “Watchband hinge” as Lenovo’s Yoga 900 convertible laptops, which makes the book’s spine look like links on a wristwatch. That, together with a metal casing and slim silhouette, lend the book a clean, modern aesthetic. The gold version is only available for the Android variant that costs $499. A $549 Windows 10 model is also available, but that (disappointingly) only comes in black. The new Yoga Book has a 10.1-inch full-HD-resolution display, but where you’d expect to find the keyboard is instead a blank slate.

In one mode, that acts as a Wacom-style drawing tablet, and works with the included Real Pen stylus. A few built-in Lenovo apps helps you take notes and annotate documents, and it should work with Photoshop and other visual art programs.

But, at the touch of an on-screen button, the drawing tablet is replaced with a backlit keyboard, which Lenovo calls the Halo Keyboard. It’s akin to on-screen typing on an iPad, but the matte surface is much better for finger control than a shiny laptop or tablet screen. Finger-typing on the Halo Keyboard should be very doable once you get used to the key size and placement.

Lenovo’s unique keyboard half of the Yoga Book is certainly a first. Virtual keyboards have been experimented with in the past but this the first time we see something hit the mainstream. For those curious, there is a haptic feedback engine in the slate half so that when you type you can “feel” the keys. Lenovo also boasts that the keyboard “constantly ‘learns about and adapts to’ the typing habits of its user, with built-in prediction and artificial learning software. This software also allows for continuous optimization.” Of course, it’ll need to be tested out to see how good it is compared to physical keys.

The absence of physical buttons helps the Yoga Book look and feel more like a regular tablet with a flat back when you unfold it all the way around. Plus, without the uneven surface, you can use the bottom half of the device as a stand, with the keyboard facing down. The hybrid is also a lot lighter (1.52 pounds) than it would have been with a full keyboard, although it’s still heavier than the Surface 3 (1.37 pounds without a keyboard).

Lenovo adapted Android 6.0 Marshmallow to automatically start recording your doodles in the company’s default note-taking app (which is the only app in the tablet that stores your input in the background) once you put the stylus to the touchpad. When you start writing, a small window pops up on the bottom right of the screen and captures your scrawls. This happens whether the tablet is awake or asleep, which is super convenient. It’s basically like having a piece of paper ready for you to write on whenever you need, and it works well. But because the screen stays off when you’re writing while the Yoga Book is asleep, it’s hard to know what you’re jotting down.

Those who can’t give up their paper addiction, however, will love this next feature. With a little finesse and jiggling of the stylus’ nib with the included pen cap, you can pull out the nib and replace it with an ink cartridge to make a real pen. Oh, and did I mention that “Real Pen” is what Lenovo named this stylus?

Here are the company’s own words in which they explain what it is capable of and what inspired it from their press release:

The flush surface of the halo keyboard feature also allows for a few additional uses when paired with the Yoga Book’s standard real-pen accessory, a dual-use stylus. Inspired by the elegance and simplicity of real notebooks, Yoga Book is an acknowledgement that we all still love to write and draw on paper. Users can now write with the real-pen accessory that holds real ink tips onto a piece of paper or notepad covering the multi-use keyboard panel, or as a stylus when applied straight onto the panel. Everything they create, from doodles and drawings to notes, is instantly digitized and saved with the Lenovo note-saving app. Roughly the size of a conventional ink pen, the real-pen accessory is powered by Wacom feel IT technologies to work with the state-of-the-art electro-magnetic resonance (EMR) film housed within the multi-use keyboard, which enables this real-time digitization.

The pen is no slouch either with 2,048 pressure levels and 100-degree angle detection. Lenovo also states that the pen does not require batteries and the ink tips are user replaceable (you get three in the box for good measure).

And when you’re not typing or drawing, the system can fold into a kiosk or tablet mode, just like any other laptop with the Yoga name — it’s just that this one is a lot smaller.

No doubt Lenovo may have stolen the show at IFA with the Yoga Book. It’s priced right and looks like nothing we have seen on the market yet. They did some serious innovation here, and I think this solves some legit real-world problems. Of course, we have to see how well it works in real life before giving any serious accolades. Nonetheless, this is by far the most intriguing device I have seen, and it could actually bridge the pen-computing gap for the regular consumer.

Powered by an Intel Atom x5 processor, the Yoga Book is available in both Windows 10 and Android versions, and weighs around 1.5 pounds (680 grams). Worldwide pricing and availability has yet to be announced, but in the US, it’ll start at $499 (roughly £380 or AU$665) and should be available immediately.