After months of leaks and rumors, Xiaomi has finally taken the wraps off its new flagship smartphone at its ‘Curved to impress’ event in Beijing, China. Called the Mi Note 2, the smartphone is successor to the Mi Note that was launched back in January 2015. The smartphone’s highlight is the use of both front and back 3D curved glass, which also gives the Mi Note 2 a dual-edge curved display like the Samsung Galaxy S7 Edge, though perhaps not as extreme in scope. The company is calling it a two-sided curved display. The smartphone will be offered in two color options – glacial silver and piano black color options.

The Mi Note 2 features a 5.7-inch dual-edge flexible OLED display covered with Corning Gorilla Glass protection. Xiaomi has also added sunlight display pro mode for legibility under direct sunlight and reading mode to ensure it does not cause strain on your eyes. The display has a screen to bezel ratio of 77.2 percent and contrast ratio of 100,000:1. It is powered by Qualcomm’s Snapdragon 821 quad-core chipset clocked at 2.35GHz paired with 4GB or RAM + 64GB storage and 6GB of RAM and 128GB UFS 2.0 storage. 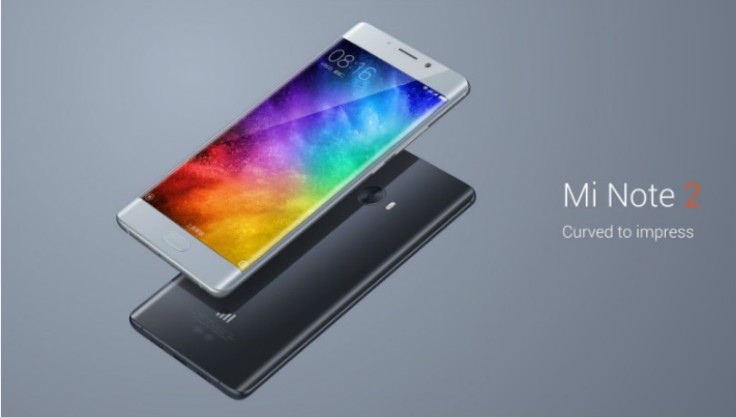 The company is touting LTE speeds up to 6000Mbps on the downlink, with 3x carrier aggregation. The Mi Note 2 also offers NFC connectivity, with support for Mi Pay. Also on board is the a DAC that enables 24bit/192kHz Hi-Fi audio. Xiaomi has also added the ultrasonic fingerprint scanner on the front, which uses Qualcomm’s Sense ID feature to precisely read your fingerprints. It is the same as we’ve previously seen in the Mi 5s.

In China, Xiaomi’s Mi Note 2 will have a Virtual SIM card function. This aimed at those traveling abroad in China to give them constant internet connectivity.

Xiaomi’s Mi VR headset will cost 199 RMB (~₹1964), and it comes with a hardware-level motion sensor and a 9-axis inertial motion controller. Xiaomi claims over 200 app developers have come together to create apps for their VR platform.

No mention of availibility in India or internationally as of now, but thanks to the wide LTE support, you’ll be able to use the Mi Note 2 in the U.S. or U.K. That’s a big deal for Xiaomi as it tries to make its way to western markets.

What do you think of the Mi Note 2?