My introduction to Android 2.3 Gingerbread back in 2012 was my first time with Android or even a smartphone. Among the other things that blew me away were Live Wallpapers. Over the years my love and fascinaton with Live Wallpapers has almost ended. For one they use up resources, and then there aren’t a lot of good choices. Not as many as I’d like anyway. Lately with the adoption of GIF images by social networks such as Facebook and Instagram though, GIFs have taken up a big chunk of the images being shared. It was only about time until people started wanting to set certain GIFs as a wallpaper.

There are quite a lot of Android apps that will let you explore a huge library of GIFs and download them such as GIFY, some other apps will let you use them as wallpapers. But you don’t seriously want to set a jarring animation as your wallpaper do you?  A lot of Live Wallpapers are indeed just a video playing on loop, but the loop is continuous. You don’t even realize when it has begun again unless you’re trying to notice. Cinemagraphs are something similar. They’re still photographs in which a minor and repeated movement occurs, forming a video clip.

The difference between a random GIF and a Cinemagraph can be very easily understood with the example below.

As you can see I’m a big Superman nerd, but also, the GIF on the left has a repeated transition between light and dark, while the image itself is still. On the right is your typical GIF.

Also read : Control volume by swiping from the edge of screen on an Android device

Cinemagraphs aren’t very rare to find either. But there’s also an app, LoopWall by Audrius Koncius , which not only has a nice collection of them but also lets you set them as wallpapers on your android device. More than 200 available images are sorted into nine categories : Abstract, Nature, Urban, Animation, Animals, Architecture, Space, Food, Other. The app also lets you set any GIF on your device as a wallpaper. 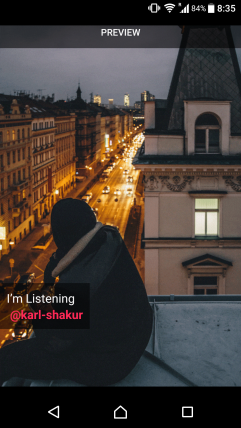 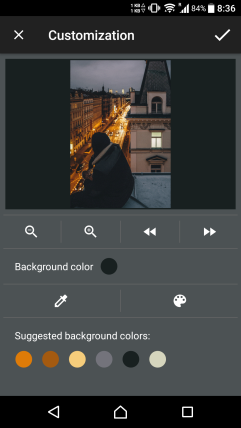 When you open the app, you’re greeted by a list of the categories and the option to set a GIF from your device’s storage as the wallpaper sits right at the bottom of it. Just select a

category you like, and swipe left and right to navigate between the GIFs. The free version of the app has a few GIFs from each category but it is still a good enough number of choices. If you end up liking the app, you can unlock the rest of the GIFs for $0.99/₹80.

Resizing and then adjusting the image on screen is quite an essential part here because you don’t want to end up with some part of your homescreen left blank. It can happen. Notice the status bar  and the small dark line at the bottom of the navigation bar below. That’s not by design. I messed up.

Have you used LoopWall before? Did yo use it now? Share your experience in the comments and let everyone know.